On Sunday we went for a walk to gather materials for our Christmas tree. Last year we made it like this and the children wanted to do the same this year, but there are no holes in the house from which to hang it like that. While looking at a craft book we came across the idea of a pyramid made with sticks for a table center piece, and we all agreed if we made it bigger it would make a great holiday tree.To me It’s a beautiful tradition we are creating, the making of our tree, and it warms my heart to know that, they too, prefer to make one than to buy.

The tree itself is made with fallen sticks, mainly of acacia (there are loads of acacias here, it’s nearly or maybe worse than eucalyptus), and then we picked a few other bits to wind around the main sticks. It has ivy, maple, pine, cypress, more acacia and other bits that I can’t identify. I really like that is made from a variety of plants around us rather than just one specie.

We also made a new advent calendar. I usually come up with the ideas myself, but this year we all contributed to it. We mixed the papers (except special days like Solstice or Christmas eve), and then hang them up, that way no one knows exactly what the activity for the day is and is a surprise for us all.

Making the most of the electricity available while we’re in the flat to prepare these last batches of soap.

The one I like the most is the simple pure castile soap, made with only olive oil. This is the one I use most, it’s perfect for the children, although I use it as often, and it’s what I wash my hair with (and then raise with water and vinegar for conditioning). This time I made a batch with olive oil infused with calendula grown in the allotment, cornmeal for a little exfoliation and mint essential oil. The last batch, not pictured, is for washing up liquid (I use the recipe in Zero Waste Home) and Laundry powder, this soap is not superfatting (most handmade soap have around 15% to 5% of oil that is not turned into soap, that is superfatting). This way the soap is not too drying on the skin, but when you’re washing dishes or clothes, you don’t really want any more oil…). 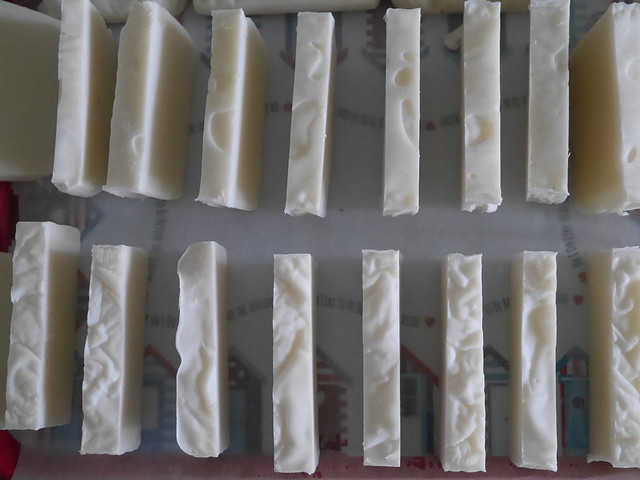 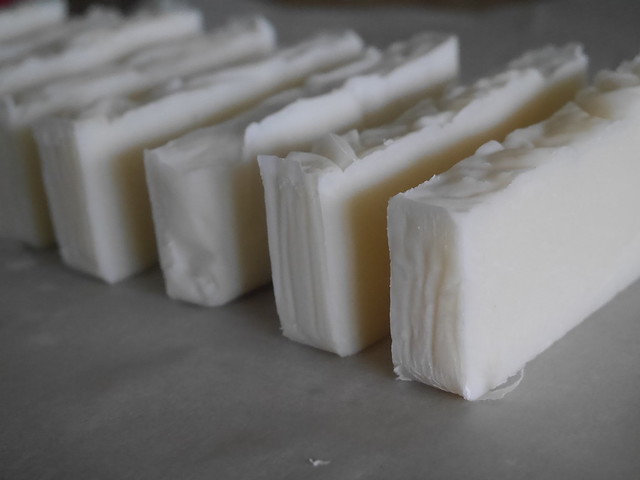 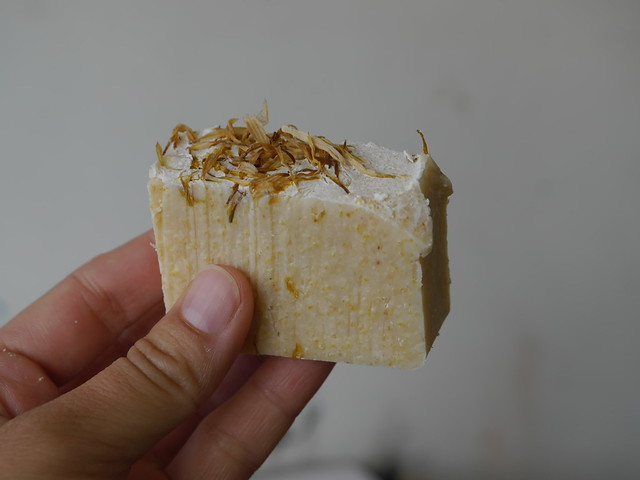 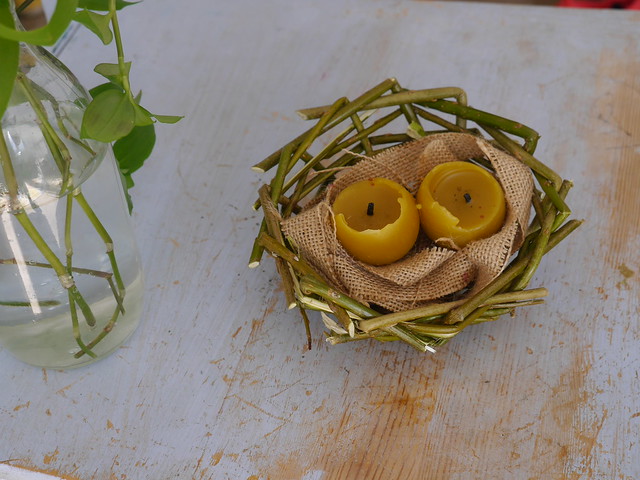 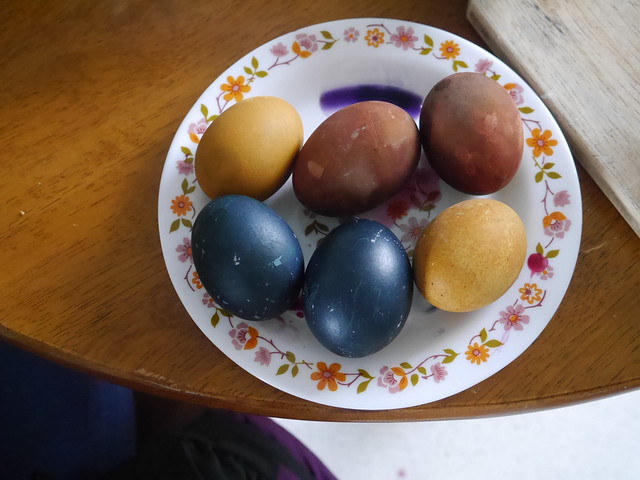 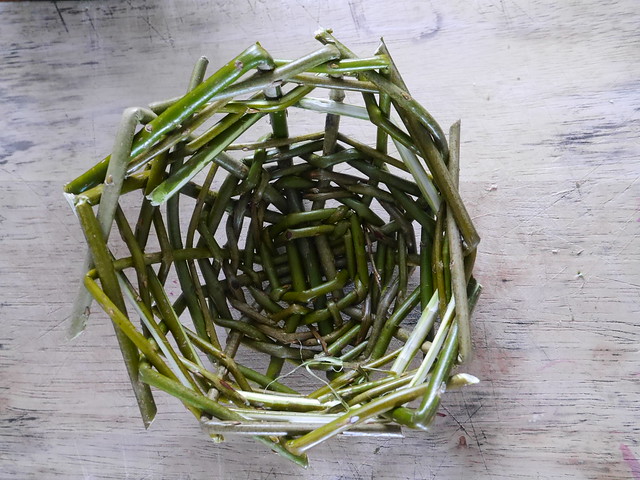 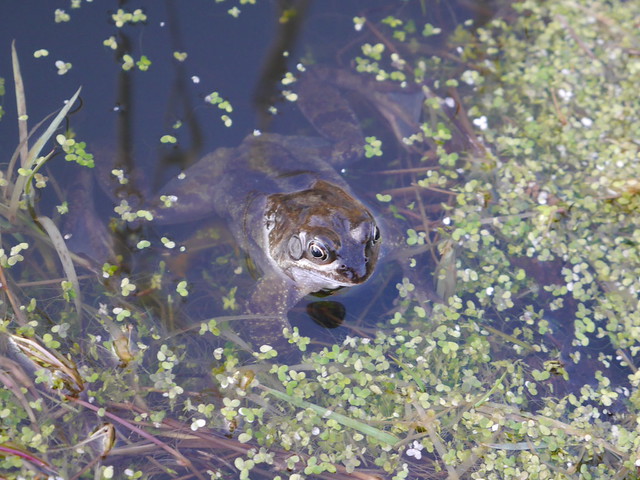 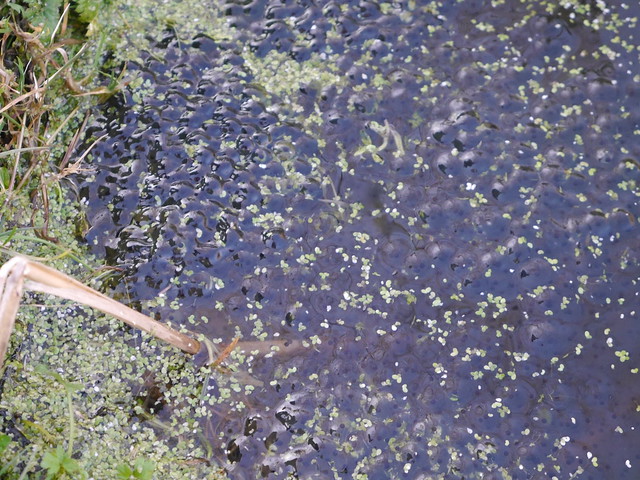 Since my last post we are no longer looking for signs of Spring, instead we’ve been admiring the yellow daffodils for a couple of weeks, plenty of wild garlic, though not big enough to pick, yet, and too many shoots to name.

We celebrated the equinox by planting seeds, made wax egg candles, dyed some eggs and attempted to reach the top of Conic Hill, but only got to about a third. The day before Easter I made a wee willow basket to serve as a nest, you tube is amazing! 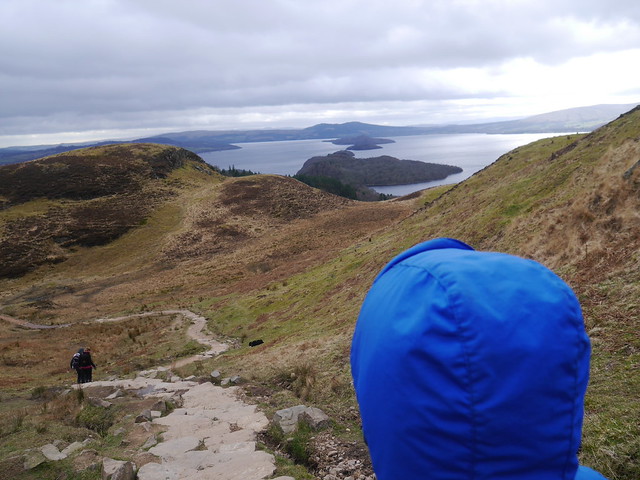 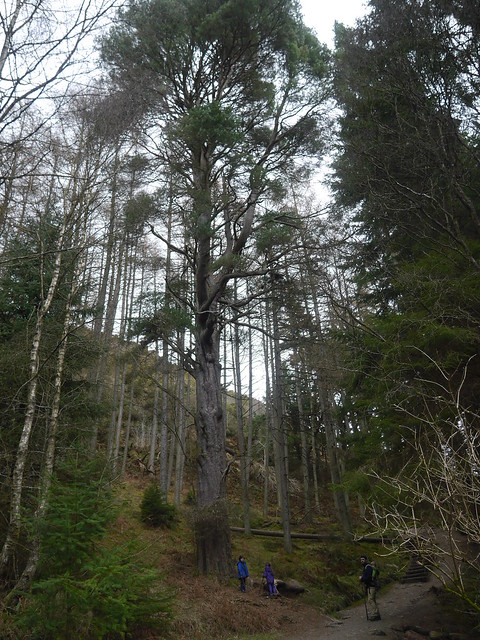 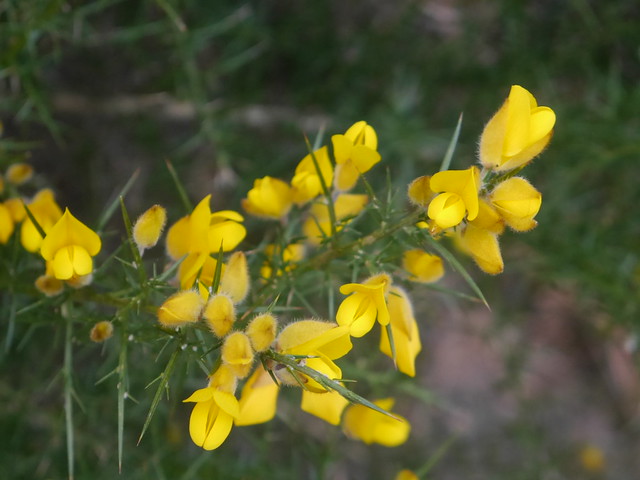 After New Years eve we felt a shift, well,  me and Paul did. Before December 31st, whenever people asked me “when are you going?”, the answer would be: next year! But after Hogmanay I realized, it IS this year! In nine, eight, seven months… not that I’m counting!

Sometimes it’s so hard to explain, I’m mean, IT IS hard to explain, this yearning, desire, but mostly, need for a simpler life, more connected to the outdoors, to nature… so much to be said, one day I will write it all down, for now it’s all bubbling inside.

Anyway, so after that realization that it is happening this year, we have been getting ready; giving away or selling things we no longer use or need, and things that we are kind of essential but we don’t really need, like drawers for example. the children’s clothes are now stored in plastic tubs and next it’ll be ours. It is still a few months away but the idea is to get us all used to this system, so that this will become the familiar to make for a easier transition, or so I hope that it’ll help.

Before I was just excited, now I’m a bit scared too, which curiously I think is a good thing! I think it means I’m not just being a romantic, but more realistic. 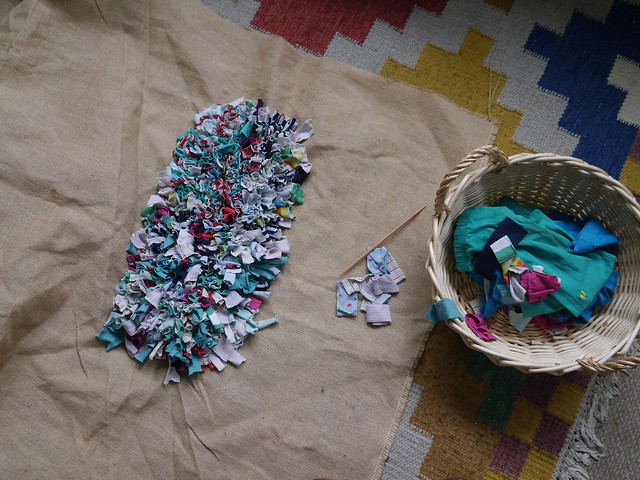 So far I have find the hardest thing to part with is baby clothes!  Every time I go throw those boxes I take a few items to give away and now I’m OK with the quantity we have; but when most of the clothes they wear is second hand, by the time it makes the third child, well, they are no good to be taken to the charity shop, but I also couldn’t bring myself to all those in the bin, so I kept them in a basket in hopes of finding a suitable project.

One day we went to the museum of rural life, and in the 50’s farmhouse there were two rag rugs. I started chatting with the volunteer there, and he told me that all you needed is an object  to get the stripes of fabric throw the hessian fabric, usually an old fashioned peg.

If I remember well, those rugs were made from potato sacks, since the big move  is only a few months away am in a kind of hurry,so I just went to my local fabric shop. I tried to use the pegs he said, but found it easier with a double pointed needle and that’s what I’m using. I’m enjoying the process more than I thought, every time I work on it I can’t help but to imagine it’s place in front of a wood burning stove because it’s so warm and thick (and the nights are cold!); it’s not the most beautiful rug, but it’s very satisfying to know that otherwise those clothes would end up in a landfill and instead they are being given another life.

the land of wishes: natural decorations

the land of wishes: solstice wreath

the land of wishes: presents for the animals

the land of wishes: solstice walk 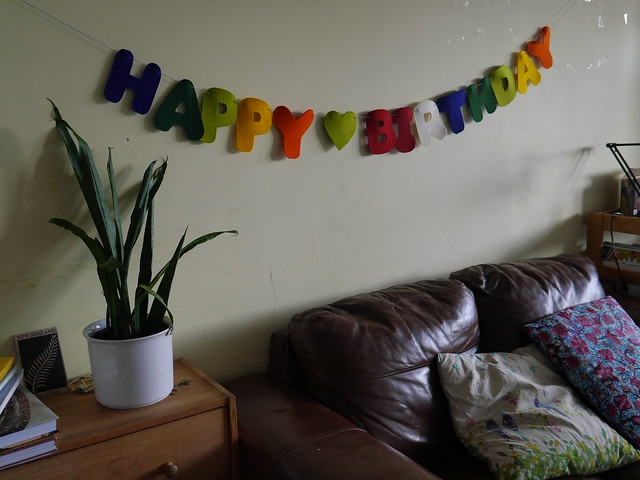 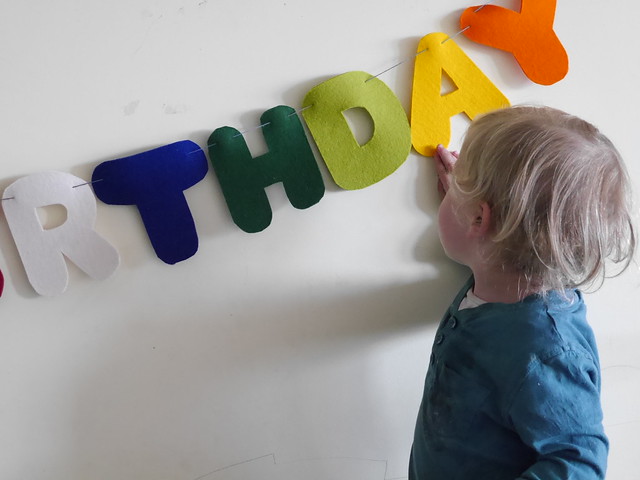 And I finally made a happy birthday sign. Do you know how long I have been meaning to do this? Since the older one was about to turn one. Do you know how old he is now? He turned seven in June… But, let’s focus on the positive side, it is made, and it will be used for many years to come.

In case you might want to know, I used a 3mm wool felt to do the letters, from this shop.

I think I might have had a wee fairy behind me or something like that because I found two amazing things in the charity shops. A beautiful wire basket and a handmade woolly jumper. I’is a little too big, but super warm and comfortable. It’s handmade and wool… I’m not complaining at all! 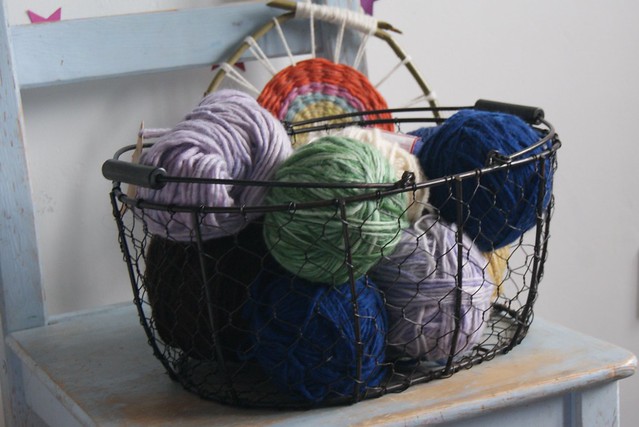 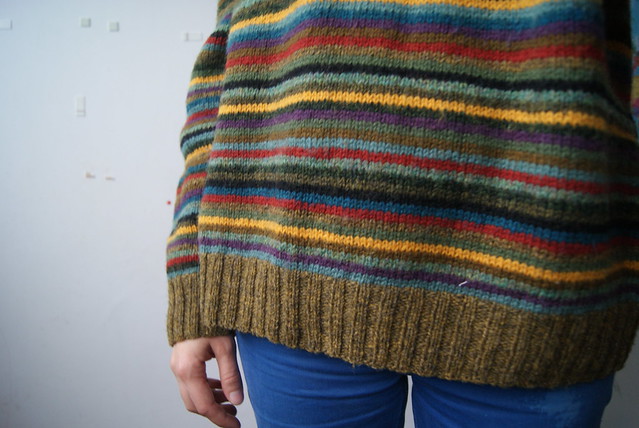 Two books I loved to read this week. Veggiestan is from the library, do you see all those yellow papers? At some point I considered to stop bookmarking because I was sticking the papers on every other page, but I kept going and run out of paper half way! The other book I bought it off a friend. 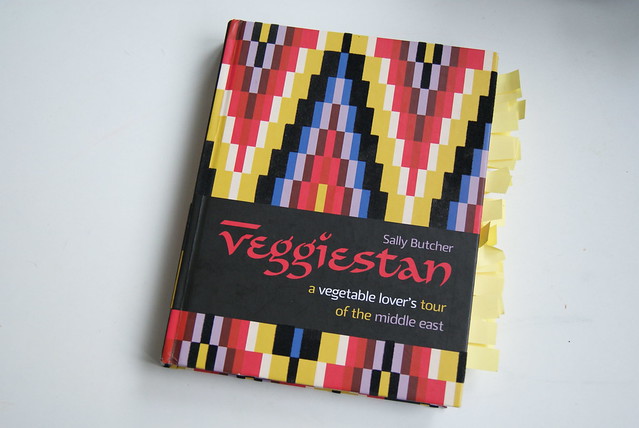 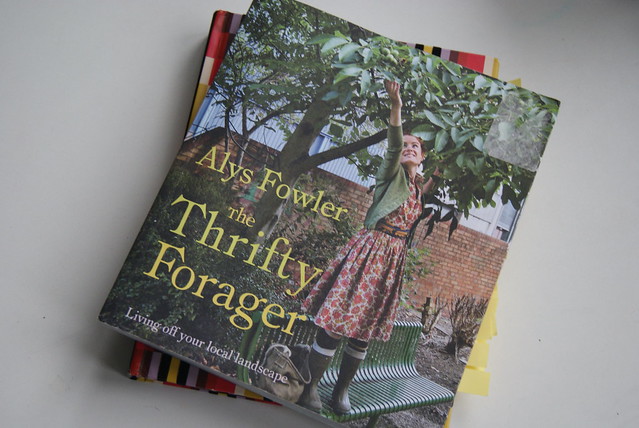 And a little weaving project with a willow frame. Is not finished yet, I think. 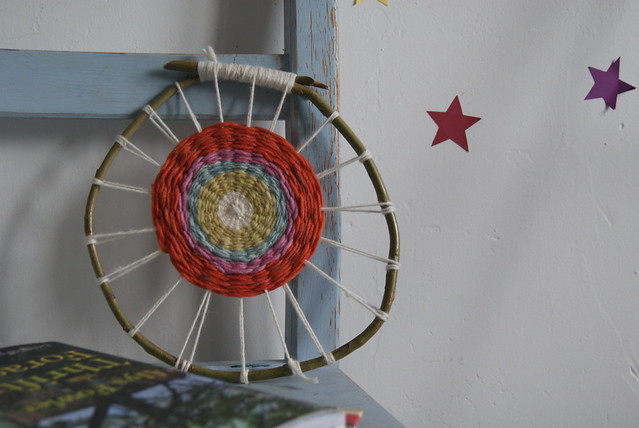 Another #visiblemending done entirely by hand, this time on sleeves. I’m not entertained happy with the result, I would liked to use another color but I used what I had on hand, and it’s done! Besides the child doesn’t mind so I would say it was well accomplished. Over the years I have found that to mend holes on a knit fabric it is better to used a knit fabric as well to mend it. Also, I used quilting thread as I find it is more durable than embroidery or sewing thread.
Little feet and handmade socks 😍 Sock yarn is held double for some seriously warmth and fast socks! Also, #wikstenharempants in #organiccotton flannel from a few months ago.
#visiblemending #reusereducerecycle
It snowed last night and the excitement was really, really high!! It wasn’t a lot but it was enough for loads of fun all day! Unfortunately is nearly all fine now because of the rain 😢
The Crannog in Castle Loch. I have been fascinated by Crannogs since I first heard of them years ago in the island of Coll. They are artificial islands built in the middle of the water and served as dwellings for people of the bronze and Iron Age, in Scotland they seem to have been used until the Middle Ages, but can you imagine people of the Neolithic period building these artificial islands? It’s a reminder of the ingenuity of our ancestors and the power of simple tools.
When I saw this setup outside I knew I must be getting a few things right!
“The road to success isn’t always pretty!” My first attempt at sourdough cinnamon rolls look nothing like it, but at least they were tasty! The children named them cinnamon blops. #learningnewskills #sourdough #sourdoughcinnamonrolls
In the face of a climate and human crisis @charles_eisenstein work helps me to keep hope alive; he doesn’t sugar coat, but somehow I’m comforted by his vision, his words, of what is possible and how we can get there. I’ve loved the title of this book since I first saw it years ago and when the children asked me what book I wanted to Christmas, this is the one I asked for; I’m also listening to the “sacred economics” as an audiobook as I’m in need of a big boost of hope! #ecoanxiety #sacredeconomics #charleseisenstein #climatecrisis
The sun is shining, so we move all activity possible outside: breakfast, food planning with @mynewroots book from the library, playing, reading...